According to entrepreneurs we met in Beijing, it is increasingly difficult to find talent in China. To make matters worse, once you’ve hired someone it doesn’t take long until a larger or more well-funded firm lures them away with higher compensation.

On our way to Singapore, we made a stop in Beijing, where we met Sigbjørn Dugal. He is the founder and CEO of edtech startup Pickatale. He shared the story of how he recently lost his CTO to a larger Chinese technology firm. After looking for opportunities around the world, the most economical option was to hire in Europe.

A few years ago, when Mr Dugal started his company, he chose Beijing because it was cost-effective. Since then things have changed a lot. Instead of hiring in Beijing, he is now setting up a remote team in Macedonia. When we met, he had just returned from a trip there.

“I’ve found a new CTO. He has a PhD and lives in Macedonia. We’re setting up an office there. The salaries for developers are less than half compared to Beijing,” says Mr Dugal.

Mr Drugal also introduced his former CTO to Macedonia, who then decided to hire a team of 30 and flew them over to Beijing for three months of training.

Last year, Macedonia grew 3%, about half of China’s growth rate (after the recent recession) and twice as fast as Sweden. In addition to the low cost of talent the southeastern European nation now offers tax breaks to entice companies to open offices in certain regions. The cost of a developer with one or two years of experience is €500 a month in Macedonia, compared to €1,300 per month in Beijing.

When adjusted for purchasing power, Macedonia and China have roughly the same GDP per capita. This is just over a third of Spain’s and a quarter of Sweden’s GDP per capita. On a global level, the Chinese economy still has some catching up to do compared to the West, but a growing number of Chinese cities are on par with European ones. 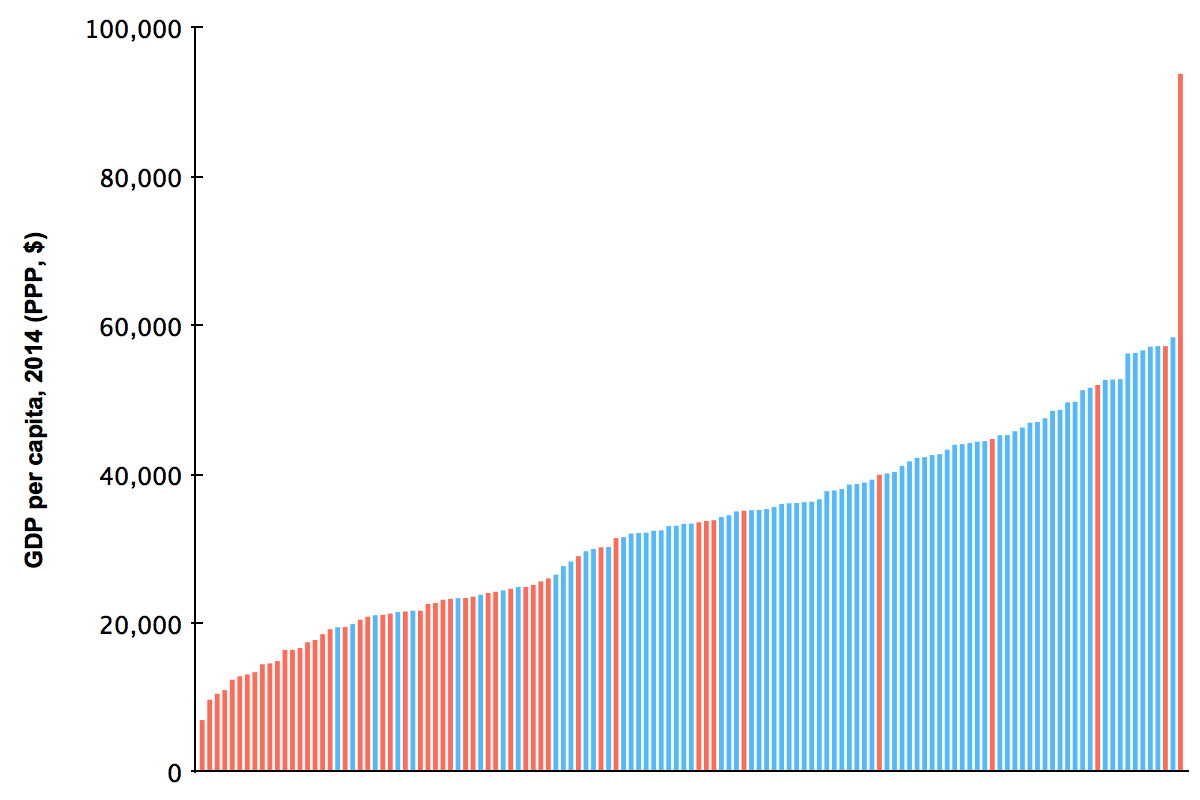 GDP per capita in the largest cities in Europe (blue) and China (red), including Macau and Hong Kong, from the Brookings Institution’s Global MetroMonitor 2014

The hardware capital Shenzhen, a city of 10 million, has roughly the same GDP per capita as Barcelona and Berlin. Beijing and Shanghai have economic outputs per capita comparable to Cracow, St Petersburg and Istanbul.

A quickly rebalancing global economy will keep challenging our preconceptions about how the world works.